The bench in the gallery looks comfortable—padded with plush velvet—but the girl’s parents don’t approve of lingering, especially in places like this. The walls are a deep, comforting garnet, like being tucked inside your mother’s cheek, squirrel-close; like being blown, dandelion feather-light, on the hearty strength of your father’s yawn. The family examine each artwork for a similar period of time—frequently a question is asked and answered on both sides—before they move on at a relentless, glacial pace. The girl makes notes in a small journal that her parents purchased beforehand at a supermarket, probably to stop her asking for one at the gift shop. Her pencil is imprinted with the name of the bank where her father works. “Memories are our own creations,” he reminds her. “It’s up to us to record and maintain them.”

They finally pause at the painting the girl has wanted to study since she walked in, which contains four figures in total. Under a stormy sky, three are huddled together under a green umbrella. One is running away, receding into the distance, holding a newspaper over its head. A dark smudge to the left of the running figure, close to the ground, might be a dog. The background is lined with trees and the umbral, splotchy suggestion of flowers.

The nurse spends her days washing and feeding elderly patients, checking their medications, updating charts. She witnesses the ebb and flow of memories, which move like a tide; on good days, they wash over the shoreline of consciousness, bathing everything in bright lights. Gilded edges form around each mental snapshot: a grandchild dressed up for Halloween, a Christmas dinner with all the family, births and celebrations dribbling with champagne and confetti. Sweet smells, savoury sights. Each memory a filling, nutritious meal.

On bad days, seaweed soaks up thought into salted strands, strangles her patients with paranoia and the lingering taste of shadows; no matter how long bottled up, fear never ceases to be potent, as bitter as a lightning flash. Insecurities and jealousies—in dappled forest shades of lichen and bark—splinter under the weight of thought. If a tree falls in the forest, the nurse wonders, why can’t it bear witness to its own destruction?

When these memories recede like a tide, her patients’ minds are left barren and bare, punctuated only with the occasional treasured shell. Conversations—like footprints—linger but do not last, and yet—

The umbrella in the painting is a sharp, fresh green, like a rose stem snipped in its prime. The girl thinks the figures beneath must be a family, with their stiff backs and same, straw-colored hair and the way they all lean together but don’t touch, painted careful millimetres apart for all eternity. When she looks up, her mother’s face in profile is thorny, as beautiful as an iceberg. It is impossible to tell whether or not her mother approves of the painting, and the girl feels panic. She raises the pen and touches the nib to the paper, but does not write.

“Well? What do you think?” Her father’s hand, hot and heavy on her shoulder, burns like an eclipsed sun.

—there is nothing. Faces aren’t quite as clear as they once were. Photographs gripped tight in wrinkled hands. Nothing. Voices, echoing through time, of the dead and maybe-dead, who can still be heard between the crackle of record grooves, and clipped accents on the wireless and—

Nothing. And then sometimes, something, on the tip of their tongues. A hand raised to brush back hair that no longer frizzes or billows in the breeze, or perhaps to greet a long-lost friend, momentarily obscured by a crowd. Swallowed up. Or down, as the case may be.

The nurse takes their hands, listens to their stories. Coaxes them into washing, eating, doing a little seated exercise. Their eyes stumble after her like newborn lambs. Faces like elderly moons, always rotating to face her, to watch what she is doing as she moves around the room, making notes, tidying up, checking medication levels. Cholinesterase inhibitors—donepezil, rivastigmine, galantamine.

The umbrella was teal, the girl thinks. It’s been over a year since the family last visited a museum, and over three years since they visited the gallery with the umbrella painting. Occasionally, her parents fight but more often they're distant; orbiting ellipses that only connect twice a year, out of sync. She often wonders about this particular gallery—at the time, she’d been anxious to say the right thing, to record the right memories, but now she recalls the moment as a time when things were perfect. Frozen. Movement is the enemy of beauty, she thinks. Growth is ugly. She asks if they can return to the gallery but her parents put the idea off, week by week, until it becomes clear they have no intention of indulging the request. They exist in time like sharks, always gliding forwards, never repeating an experience. The girl satisfies herself with memories; both written and mental, but gaps trouble her.

Her father’s hand on her shoulder, warm and reassuring. Her mother’s usually perfect eyeliner, slightly smudged. Something had happened that morning—a telephone call, perhaps, radiating staccato murmurs, foreshadowing death. A blister on her toe, not yet born but gestating with raw potential.

The nurse knows when an end is near. She watched a documentary on tsunamis once; if the first part of a tsunami to reach the coast is a trough, rather than a wave crest, then the water along the shoreline is hauled back, as if the ocean is taking a deep breath, ready to scream. Parts of the shoreline which would normally be underwater—protected, invisible, subconscious—are exposed. The narrator called it a drawback, but the nurse can’t see anything wrong with a cautionary sign about the future. Forewarned, as they say, is forearmed.

Often, patients talk of love and loss; a miscarriage, a divorce, the one that got away. She’s heard the rattle of every skeleton, no matter how long they’ve been locked up or how deeply. The tsunami pulls back the curtain, allows her to see the actors mouthing their words, the stagehands moving to and fro. It’s not her place to judge—she, who has never married, whose affairs have been perfunctory. She sandwiches her patients' cold hands between the warmth of her own, and reassures them that whatever happens, she will be present. No one will die alone.

The umbrella in the painting was turquoise; a brilliant, pure peal, resounding like a church bell. In her thirties, growth is no longer ugly but a joyful necessity. The girl is now a woman, a medical professional, a chronic journaller. She recalls her father’s hand on her shoulder, as light as a question. The interrobang of her mother’s perfume was a thin mist of fragrance, green-leaf-volatile as cut grass, lacking the baritone of earth-rich foundational notes; a balloon, let go on purpose, sailing into a blue sky.

The blister, somewhere on her foot, is no longer anchored to any particular part. A loose bandage, covering a deeper, yawning ache. Her parents are echoes, fading in time. She has never been a parent herself, has shied away from the idea of raising a new human from acorn to oak. Perhaps she is not good at beginnings, but she understands instinctively what a proper ending should be.

The nurse has tasted loneliness, drunk it like an aged wine, and found it pleasing. The patients are her children—older than she is by decades, birthed on death’s door, knocking, pulling back the brass hammer, inviting themselves inside. Life is an umbrella, she believes, a temporary shelter from the downpour of crises. To stand under the arc, to be at one with the curve—dry, intact—is a gift she intends to share for as long as she owns it.

The umbrella was blue; a shiny, glossy cobalt, regal in its richness. In her fifties, her joints have begun to creak. In cold weather her left wrist, once broken, aches to foretell a storm. She recalls her father’s hand hovering over her shoulder, exerting no pressure; after all, an experienced rider has no need to use the reins, only his knees. The smell of her mother’s perfume, no longer a cloud but a sparse connection of atoms; no longer able to be smelled as one complete scent, like trying to read an entire word from letters hidden on different continents of a globe. Even records can change under scrutiny; she believes the universe can be knowable or locatable—not both. Late into the night, at the bedside of an old man wheezing his last breaths, she reads aloud from yellowed notebooks scrawled in a childish hand.

The old man sometimes asks who she is; the woman does not know how to answer. Later, when his heart has stilled and her tears have wetted the paper, adding another layer to the memory—written then, accessed now, lived countless times—the sound of a dog barking outside, rain drumming on her window, stirs something long buried under settled dust and she wakes up—

—in this bed, as this woman. Her hands and feet are cold but the window is closed, and yet when she blinks the window is open, blinks again and it’s closed and the calendar on the wall reads the previous month. The picture has changed too.

Perhaps it does not matter what colour the umbrella is, only that there was an umbrella and now she steps out from under it, unshielded, untangled. She is a girl—was a nurse—is a woman—was a memory.

The umbrella is blue; the brightest, primary blue. The rest of the memory is stillwater, reduced to grey, as if boiled too long. The tsunami crests—

and hangs there, waiting,

for the right time to fall.

Lindz McLeod is a queer, working-class, Scottish writer who dabbles in the surreal. Her prose has been published by Catapult, Flash Fiction Online, Pseudopod, and many more. She is a full member of the SFWA, a Rogue Mentor, and is represented by Headwater Literary Management. 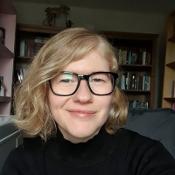